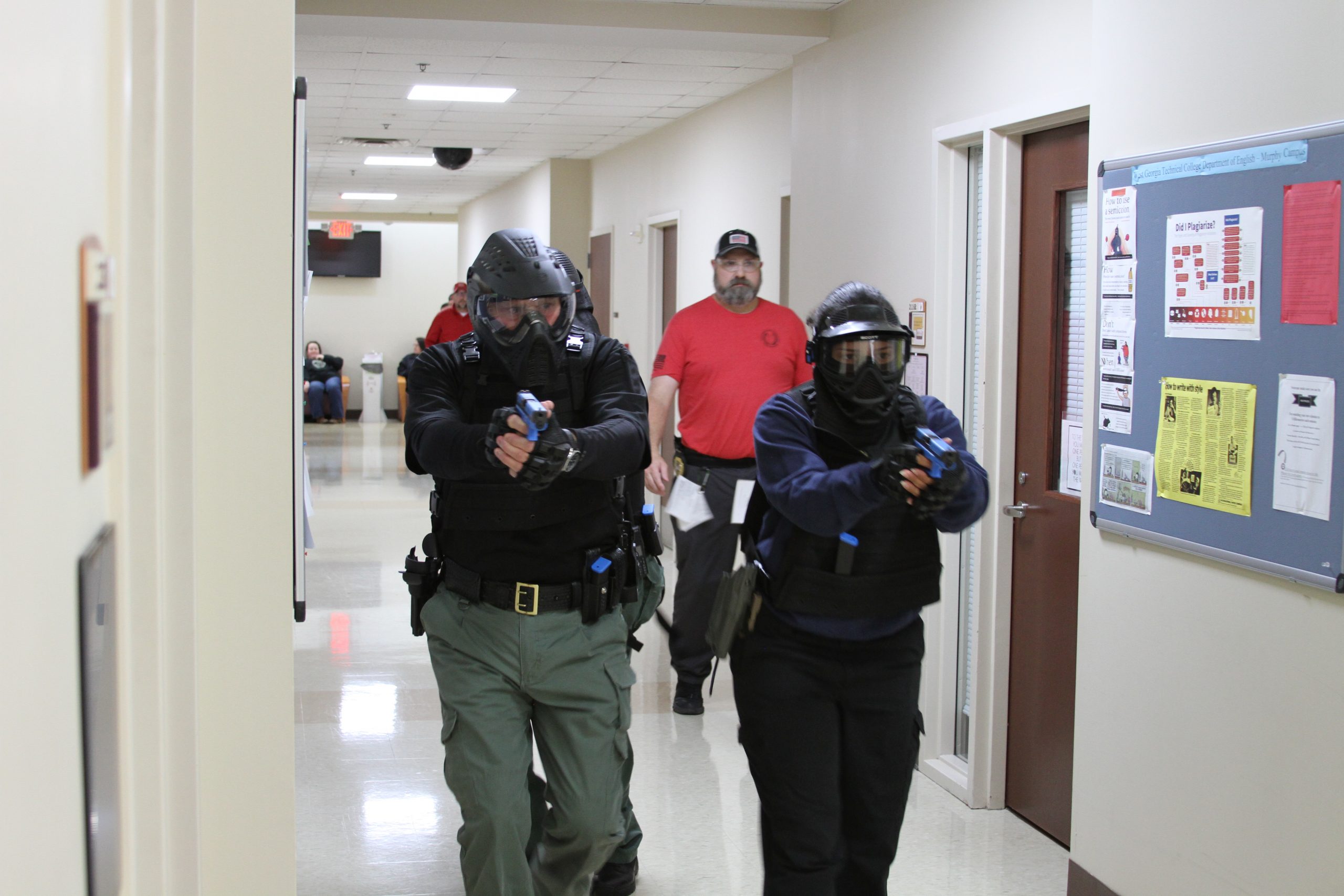 West Georgia Technical College Police joined 11 other agencies December 20 for a large-scale training event on the college’s Murphy Campus in Waco. The training was made possible in part through a $23,703 grant from the State of Georgia’s Criminal Justice Coordinating Council.

West Georgia Tech’s police force serves the college community and works closely with surrounding first responder agencies to each of the college’s seven counties. WGTC officers have primary response to all calls on the college’s five campuses, two instructional sites, an administration building and mixed-use spaces in college and career academies. While the majority of these calls are mundane, the mix also includes medical response calls, domestic violence, fights and the occasional person with a weapon, Chief James Perry said.

“Knowing that we deal with a range of situations on college campuses, we requested funding to help us prepare for a worst-case scenario where our officers need to be able to handle a situation that requires use of force, but one that could be resolved peacefully using de-escalation techniques,” Perry said.

The grant, awarded through the CJCC’s Law Enforcement Training Program, was used to purchase training equipment for these types of large-scale, multi-agency events. “We strive to make training as realistic as possible, so we utilize force-on-force scenario-based sessions as often as possible,” Perry said. “Tactics and techniques are taught to de-escalate hostile aggressors as much as possible. No better training exists today than placing two human beings in a scenario with each other, who are both mentally capable of out-thinking the other and being free to react off the other person’s action. An officer who understands command presence and utilizes good verbal skills will most often be the one who handles daily calls in a professional and successful manner.”

The training December 20 focused on how to respond to an active shooter and was conducted between semesters so that student learning would not be impacted. Including WGTC police, 12 agencies participated in at least one of the two training sessions. WGTC police have held similar training events in the past on both the Carroll and Coweta campuses as part of a series of training events WGTC conducts on-campus to help local first responders become more familiar with the campus environment and the unique challenges they could face in responding to emergencies there.

The grant was awarded to the WGTC Foundation, which solicits and receives donations to benefit the College.

“We are so pleased with this partnership that has enabled the West Georgia Tech police force to purchase training equipment,” WGTC Foundation Executive Director Brittney Henderson said. “The Foundation’s role is to enable WGTC to do things outside the scope of regular funding, and this is a perfect example of that.”

West Georgia Technical College, with campuses in Carroll, Coweta, Douglas, Haralson and Troup counties and class sites in Heard and Meriwether counties, offers more than 140 associate degree, diploma and technical certificate programs of study. A unit of the Technical College System of Georgia, West Georgia Tech is one of the largest of the state’s 22 technical colleges. For more information, please visit westgatech.edu.