The Kiwanis Club of LaGrange has committed to a $25,000 endowment that will support students at West Georgia Technical College. This endowment – known as The Kiwanis Johnson-Frear Endowment – is named for two Kiwanians who funded the effort through the club’s annual clay shoot tournament.

“We are so grateful to have the Kiwanis Club of LaGrange’s investment add to our gap funding program and its ability to retain more WGTC students than ever before,” Foundation Executive Director Kelsey A. Jones said. 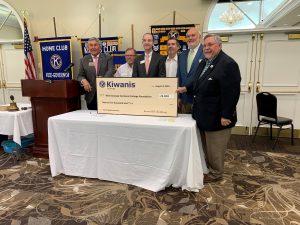 “Since its inception in 2018, the gap funding program has helped over 470 students remain enrolled in classes who otherwise would have been released due to nonpayment. This program not only helps the College to retain and graduate a more skilled workforce, but also changes individual student lives as they are given the ‘gift of time’ when paying for their educational expenses,” she said.

The WGTC Foundation’s Gap Funding Program fills financial “gaps” in a student’s ability to pay his or her tuition or fees owed to WGTC. Students who receive gap funding are expected to repay the funding, and the WGTC Foundation has seen a return rate of between 91 and 98 percent. Before the program was created, students had been released from classes for balances as low as $10. Students who are released WGTC are less likely to return later and complete their education.

“Our WGTC Foundation Board of Trustees is to be commended for its leadership in envisioning and executing the Gap Funding Program. Students benefit not only monetarily, but also in knowing that there are people in their own community who want to see them succeed,” WGTC President Dr. Scott Rule said.

“I am so grateful to the Kiwanis Club of LaGrange for seeing the two-fold value of this program and becoming an early and important investor, ensuring its long-term sustainability. Many thanks to the entire club under the leadership of President George Elkins, and a special thank you to the club’s fundraising co-chairs Charlie Frear and Jerry Johnson for their efforts making this a reality,” he said.

West Georgia Technical College, with campuses in Carroll, Coweta, Douglas, Haralson and Troup counties and class sites in Heard and Meriwether counties, offers more than 120 associate degree, diploma and technical certificate programs of study. A unit of the Technical College System of Georgia, West Georgia Tech is one of the largest of the state’s 22 technical colleges. For more information, please visit westgatech.edu.