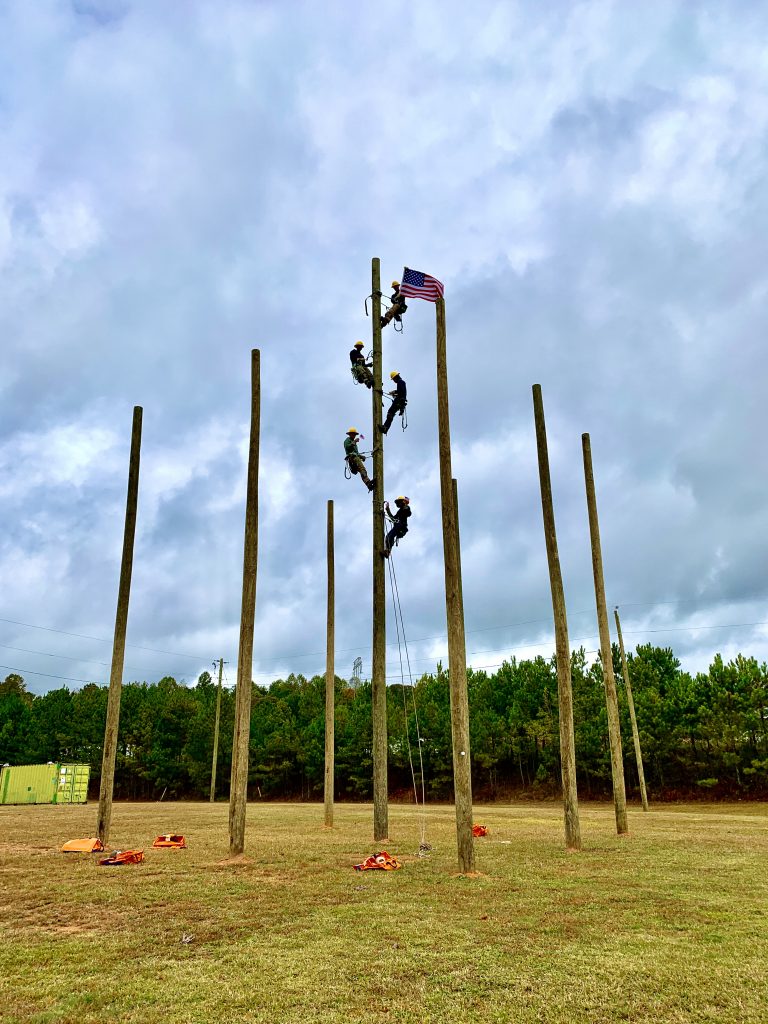 The five students graduating from the new Apprentice Electrical Lineman program at West Georgia Technical College October 28 showed off their new skills on the final day of class. The four-week class teaches basic skills needed for entry-level employment as a lineman. The next class begins in January.

“This first cohort has been amazing to watch! Our instructor, Scott Teal, instilled a safety-first culture and taught them real-world experiences as lineman,” Vice President of Economic Development and Community Affairs Angela Berch said. “Our partners participated from day one with this class and we can’t thank them enough. WGTC is excited to train more individuals with this skill set and put them on their career path as apprentice lineman.”

On the last day of class, representatives from Carroll EMC, Coweta-Fayette EMC, Georgia Power, GreyStone Power, ProSource Utility and Powerline Services came to do on-site interviews with the graduates. Family and guests were invited to watch the new apprentice lineman demonstrate their aerial and pole-climbing skills in the training yard.

The Apprentice Lineman program, offered by the Economic Development Division at WGTC, was created after local industry partners expressed a need for lineman training in the West Georgia area. It is the first non-credit lineman program offered by a technical college in the state of Georgia.

The program was totally customized based on input from the industry partners, Berch said, and recent Carroll EMC retiree Scott Teal is the instructor. Teal started his career at Carroll EMC as a meter reader in 1987. During his time there he became an Apprentice Lineman, Lineman, and ended his 34-year career this year as a System Design Staker.

Students in the program are trained with the necessary skills for entry level lineman employment including safety, construction, pole climbing and more. Students will also earn CPR, OSHA 10, and DOT flagging credentials and learn soft skills such as interviewing and resume writing.

“As my generation retires, it is imperative for us to give back to our career to train up new linemen with the latest and newest improvements while continuing to keep the focus on safety,” Teal said. “This training provides the foundational skills needed for future linemen as they begin their adult lives in a career that puts others first.”

The next Apprentice Lineman Program cohort will begin in January 2022 and will be conducted at WGTC’s Murphy Campus in Waco. A CDL license is required for admission into the program. WGTC conducts both day and evening CDL programs at the Carroll and LaGrange campuses. For more information about the Apprentice Lineman Program, contact Linda Sullivan at linda.sullivan@westgatech.edu or 678-664-0516.

West Georgia Technical College, with campuses in Carroll, Coweta, Douglas, Haralson and Troup counties and class sites in Heard and Meriwether counties, offers more than 140 associate degree, diploma, and technical certificate programs of study. A unit of the Technical College System of Georgia, West Georgia Tech is one of the largest of the state’s 22 technical colleges. For more information, visit www.westgatech.edu.